Instead, and more correctly, the air gap introduces a large amount of reluctance within the core. It is within the gap that much of the energy is stored.  A large reluctance requires a greater magnetomotive force to push the same flux within the core than without the gap. This is much like a large resistance within an electrical circuit, that requires a greater voltage to push the same current than a lower resistance would require.

Clearly the path length is not changing so it is equally fair to say that the effect of an air gap is to require a larger magnetic field intensity for the same flux density as without the gap.

Now, let’s further assume the turns do not change along with the path length. This means more Amps are required for the same flux density, i.e. one need put more current through an inductor with an air gap to achieve the same flux density as with an un-gapped core inductor.

This is often why some may think it increases the flux density of a core because, after all, you can put much more current into this gapped inductor than without the gap and not saturate the core. In fact though, this greater current is required to achieve the same flux density as without the gap.

We will soon look at this on a B-H curve. H is the magnetic field intensity and B is the flux density. They are related by the permeability of the core material…

Now, if the flux density is fixed at some value, say 1T, and if introducing an air gap allows for an increased H via an increased current, then clearly mu must be smaller than it would be without the gap for this equation to hold true. Here you can see mu is simply the slope of this simple linear equation.

What this means is that the slope of the B-H curve must be less for an air gapped core inductor than it is for one without such a gap. This relative permeability drops like a rock at core saturation as can be seen next.

Inductance is directly a function of the relative permeability and so it too must drop like a rock. 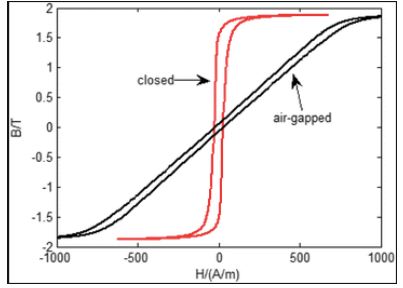 As one can see above, the B-H curve does indeed have a lesser slope than a non-gapped core inductor. From this graph alone one can see that for the same values of H that would normally saturate the core of an un-gapped inductor, the gapped core inductor is not saturating. For example, at 500A-T/m, the closed core inductor is clearly saturated with a relative permeability that has dropped immensely, while the air gapped one is at about 1T with room to spare and a relative permeability that is virtually unchanged.

The saturation point of a core is due to its material properties but it is also a direct function of the turns wound on the core and the core area for a particular magnetic flux density. We can write this in equation form….

This says the product of the peak current and inductance is directly related to the turns, core area and the cores flux density. This equation says more if we look at it closely.

Let’s say at some particular current the value of B is at the core’s MAX value, it can go no higher; the turns N are fixed, and the core area A is fixed. Now what happens as you increase the current further? If everything on the right side of the above equation is fixed then in order for the equation to hold true as the current is increased the inductance must drop in turn.

Double the current and the inductance must be halved. This means there is some current at which the core saturates, such that B no longer can increase, and that if increased beyond this current must reduce your inductance in kind. Now keep in mind the actual inductance does not drop equally as much as increases in current after reaching Isat because the relative permeability, while super low compared with what it was, is not zero and it doesn’t ever reach zero exactly.

A core’s B-H curve is only “nearly linear” over some range and also the flux density, B, can and does increase beyond it’s “spec’d MAX” value but only very minimally as it asymptotically approaches a fixed maximum value (while the relative permeability asymptotically approaches zero). It is fair to say that the inductance does drop nearly in step with increases in current beyond some large H value (at the end of this write up we use this idea graphically).

What this means is if you want to make an inductor that won’t saturate at some high current use enough turns, and/or enough core area, and/or a core that has a high MAX flux density, but why not always just gap the core? Gapping the core we showed makes the inductor handle more current than it would otherwise without saturating…..what are the disadvantages of gapping a core?

Gapping a core with an air gap does indeed allow for higher currents before saturating the core but it also lowers inductance significantly for a given number of turns. It also means with a great concentration of stored energy at the gap there is more heating at this location.

So when do you gap and when do you not gap? If for some certain sized core, you find that you need more current without saturating the core, and your required inductance is such that you can meet it by simply adding more turns, then gapping the core is probably a good idea.

Let’s say for 25T’s, on some core, you are at a required inductance…say 500uH (an un-gapped AL of 800nH/T^2). Let’s say this inductor can handle 1A before saturating causing the inductance to drop significantly. What if you need this to be 3A?

Well what happens to the inductance at 3A if at 1A the core is saturated and the right side of the below equation cannot change?

Clearly the inductance must drop by one-third in order for the current to increase by a factor of 3, so it is down to ~ 167uH – too low….

Let’s look again at the above inductor equation….

Now we have met the 3A saturation current and the inductance is 500uH, but what happens when we decrease the current? What is the NO LOAD inductance? It is a function of the reluctance well before the core is at saturation; the product of the un-gapped AL and 75T’s squared. This is 4500uH!!

This is huge compared with the required 500uH we want. This is because with the core saturated B barely increases and so the relative permeability has dropped considerably at 3A in order to give us the much lower 500uH at 75T’s compared with 4500uH @ NO LOAD.

This inductor would work, it would be 4500uH @ NO LOAD and 500uH @ 3A. Not good engineering practice though….a 9 times change in inductance over 3A…

Now the reluctance is a function of the gap length and not the relative permeability….this can be useful….

We know we need 75T’s for our inductor to handle 3A with 500uH of inductance, this formula below says as much….

We want a reluctance that is not changing by a factor of 9 between NO LOAD and Isat. So we set the gap such that it yields a value of reluctance that meets the following:

This yields an AL of 89nH/T^2. This reluctance (and hence AL) are fairly fixed being a function of the gap length and not the relative permeability. This means our inductance at NO LOAD is, in

If you need 500uH at 3A then just set the reluctance to be something like:

Then it will very likely be right about 500uH at 3A while 540uH at NO LOAD (you can study the B-H curve for the core you are using and get a more exact initial inductance to use above such that you target 500uH at 3A).

Is this everything? No…it never is…another item one should consider when gapping a core is something known as the fringing flux. 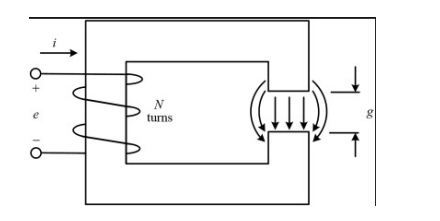 What is important about the flux “fringing” upon exiting and re-entering the core? Well, almost all of the reluctance in the magnetic path is at the air gap (hence why we set the reluctance as a function of the air gap only). The reluctance is also inversely related to the area that flux passes through; this lowers reluctance. Inside the core the area is the core’s area but at the gap the area increases over the gap distance. As we showed in formula, reluctance is the reciprocal of the AL value. Therefore, the AL value increases as this area increases due to the reluctance decreasing. This means, in our example above, if the gap is not super tiny (such that fringing can be safely ignored) then we’d end up with more than 500uH of inductance using 75T’s.

There is an equation that can help get you back in the ballpark though, known as the fringing factor equation. It is as follows:

Now if you’re targeting a particular inductance and you find that your given gap length, g, ends up giving you an inductance that is higher than what you calculated, then you need to reduce the AL value. You can do this by increasing the gap distance a bit more or by decreasing the turns a little.

The advantage of this is that the effective reluctance is what you need it to be over nearly your entire current range from NO LOAD to Isat so your inductance with the fringing factor can be the inductance you want, so your saturation current increases to more than what you need and/or you can use less turns; saving copper, reducing DCR and increasing efficiency.

Why is this? Let’s look at these equations…

Now if you decide to lower inductance by decreasing turns but keep the reluctance the same (no change in gap length). Equation #1 says a small decrease in turns increases Isat. Equation #2 says a small decrease in turns decreases the right side a small amount but it decreases the inductance on the left even more as inductance is a function of turns squared, so the net effect is an increases in Isat. Again the two equations agree.

When you use the fringing factor equation with some gap you chose to meet some inductance, and the FF equation tells you the inductance will actually be a bit larger, then you have essentially “overdesigned”, or designed in a margin for Isat that can be gotten by reducing inductance to what you want more exactly by either of the two ways just mentioned.

Personally I would opt to decrease the turns a little. It has the same effect of increasing Isat a little but in addition less turns means lower DCR which means increased efficiency.

At 3A they are the same value, 500uH. Our gapped inductor has always been 500uH while our un-gapped one has simply reached a point on the B-H curve where the relative permeability is so low that it has made the inductance drop to 500uH. 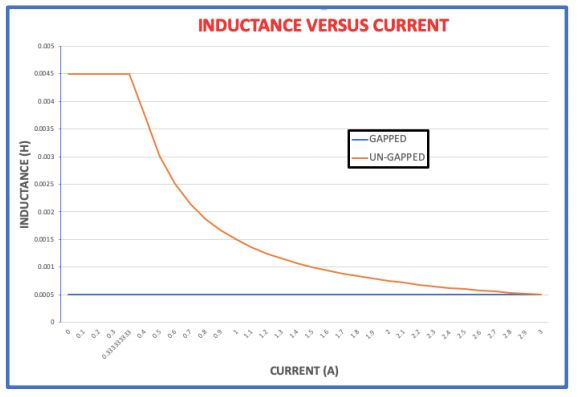