Nikola Tesla vs. Thomas Edison: The War of Currents

Nikola Tesla vs. Thomas Edison: The War of Currents

The Department of Energy launched a poll:  Who is the greater inventor, Edison or Tesla? 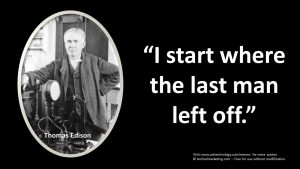 Before getting to the poll results of Nikola Tesla vs. Thomas Edison, AC vs. DC, it is interesting to learn a little more about the inventors as individuals.

We credit U.S-born Thomas Alva Edison with inventing the light bulb, but in point of fact a light bulb prototype had been invented 50 years prior to Edison’s improvement of the invention.  The opportunity to tweak the invention arose because the original was too expensive to mass produce. By using a carbon filament and improved vacuum, Edison could modify the original prototype and produce the first commercially viable bulb. Thus, there grew a high demand for electric lighting, which led Edison to construct the first power plant in Manhattan.  Using DC voltage, the distance from the plant for usage was limited to less than one mile. Notwithstanding the limitation that existed with distance from source, 500 homes could receive service. This facility was groundbreaking. 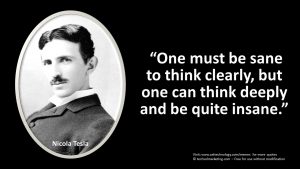 Born Nikola Tesla had a formal education in mathematics. He could perform fundamental calculus in his mind sans written steps. Tesla did not have the resources he needed for his projects in Serbia and took an opportunity to move to New York to work for Edison. The two great men shared strange commonalities: both were egomaniacs (that hated showoffs) and both were workaholics, needing less than four hours of sleep. They, however, also shared distinct differences: Tesla was a germaphobe and in particular, he had a “violent aversion against the earrings of women.” Edison was a bit slovenly and totally unimpressive in appearance. The always fashionably-attired Tesla once said about Edison, “…he lived in utter disregard of the most elementary rules of hygiene.”

The Story of Edison vs. Tesla

Edison relied heavily on experimentation and trial and error whereas Tesla had the ability to visualize and work out concepts in his mind before building a prototype. Tesla proposed an AC motor and generator but Edison favored his own DC power and called Tesla’s idea “impractical”.

Tesla lobbied Edison for months that he could improve the efficiency of Edison’s DC plant. Edison remained skeptical but told him that he would give him $50,000, if successful. Tesla worked for several months and attained the efficiencies he promised and when he asked for the bonus, Edison claimed he wasn’t serious, declaring “When you become a full-fledged American, you will appreciate an American joke.” And, instead offered Tesla a $10 per week raise.

Tesla immediately quit and did odd jobs such as digging ditches until he met George Westinghouse, who gave him one million dollars for several of his patents. Westinghouse also had a bitter feud with Edison. The Westinghouse AC generators were used in the first electric chairs. Edison tried to popularize the term being “Westinghoused” instead of electrocuted.

When the polls closed, and the debates concluded, the first agreed upon consensus was that these men had very different ideas about harnessing electrical power.  Tesla—a scientist and also considered a visionary—went with the possibilities he first imagined in his head.  Edison—a master engineer first—worked from drawings and blueprints and assorted sketches, while developing his practical technologies.  At the end of the debate, the nod went to Tesla as the most important—but even at that the opinion was qualified by noting that these two geniuses complemented each other.  Perhaps, in the end, it was their differences that motivated each to continue competing for new possibilities in the world of science and electricity.

What are the importance and continuing impact of Edison & Tesla?

Edison wins the race with almost 1100 patents vs. the 300 that Tesla was granted.  History shows that Edison had dozens of qualified scientists developing ideas with him and he also purchased many patents.  Edison was well off at the end of his life – but died alone as the mean-spirited person he had become.  Tesla died bankrupt and alone.  So, it would seem here at least, that the life of geniuses can be absent some important rewards, namely, love and friendship.  The Thomas Edison Center at Menlo Park is a great resource for young and old.  Many teachers use it as a learning tool for student tours.  You can find out more about Edison and the commemorative park at:  http://www.menloparkmuseum.org/.  A museum in honor of Nikola Tesla was established at his Wardenclyffe Science laboratory in Shoreham, NY.  You can learn more about Tesla and the Center at:  http://www.teslasciencecenter.org/.  Edison and Tesla were both great inventors and we all have reasons to appreciate them equally for what they created to enhance our daily lives.