CET Technology was contracted by a client to design and build a flyback transformer for a switch mode power supply to generate 12VDC in a spa control box. The customer’s original transformer had too high of a leakage inductance that induced noise in the regulation of the power supply. The noise was so substantial that the output ripple became excessive to where the power supply would fail to operate correctly. CET redesigned the transformer by changing the winding method to produce a lower leakage inductance.  It was a challenging project in that the transformer had to run over a wide range of output power levels and input voltages.

Due to the urgency of the project, CET was able to offer fast turn-around on the design and prototype.  Subsequently, the customer placed a blanket order. CET maintains inventory at their New Hampshire facility on behalf of the customer for a Kanban scheme.

What is a Flyback Transformer?

The primary windings are wrapped around a ferrite core with the secondary windings then coiled around the primary.  To mitigate leakage inductance, the primary and secondary can be wound in interleaving layers. The energy storage can be substantial.

A flyback transformer does not require an input waveform resembling the output wave, which is a typical necessity in other forms of transformers. A transistor is typically used to act as a DC supply switch that is used to energize the primary windings of the flyback transformer. Switching on the transistor allows current to build up due to primary inductance in the form of a ramp. When switching off, the current in the coil collapses with considerable energy accumulated in the core of the transformer. The current begins to flow in the secondary–resembling a descending or downward ramp, hence the saw tooth waveform.

Current flows through the secondary windings only if the output voltage reaches optimum levels. If the current in the secondary windings is completely discharged to zero,–that mode of the flyback transformer is deemed to be working in a discontinuous mode (DCM). If any amount of energy remains in the magnetic core of the transformer, it is then identified as continuous mode (CCM), which is the operating mode of switch mode supplies. The saw tooth pulse train is converted to DC voltage by using a filter.

Flyback transformers are inexpensive, have a streamlined design and are highly efficient.  They are a perfect power supply design for power ranging up to 100W, and even to 150W. Their coils, unlike other circuits, are isolated from one another. The topology of the flyback transformer is unique within the transformer family.

CET Technology specializes in the design and manufacture of standard and custom magnetics.  CET manufactures a full line of ROHS compliant components including transformers, power supplies, inductors, coils, chokes and DC/DC converters.  They use the latest manufacturing techniques to guarantee lower production costs with excellent repeatability and performance. 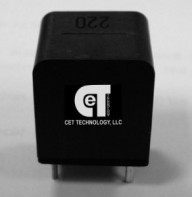