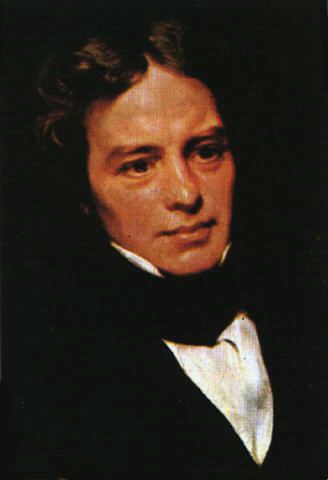 Michael Faraday (1791-1867) was an English scientist whose many experiments contributed greatly to the understanding of electromagnetism, making him one of the most influential minds of the 19th century. Notably, Faraday began his career as a chemist. He wrote a manual of practical chemistry that reveals his mastery of the technical aspects of his art, discovered a number of new organic compounds, among them benzene (and was the first to liquefy a permanent gas). His major contributions were in the fields of electricity and magnetism. He was the first to produce an electric current from a magnetic field, invented the first electric motor and demonstrated the relation between electricity and chemical bonding. He also discovered the effect of magnetism on light, and discovered and named diamagnetism (the peculiar behavior of certain substances in strong magnetic fields). Faraday provided the foundation upon which James Clerk Maxwell erected classical electromagnetic field theory.

Michael Faraday, who came from a very poor family, became one of the greatest scientists in history. His achievement was remarkable in a time when science was the domain of people born into privileged families. His family belonged to a small Christian sect, called Sandemanians (ca 1730), that provided spiritual sustenance to Faraday throughout his life. It was the single most important influence upon him and strongly affected the way in which he approached and interpreted nature. The Sandemanian churches attempted to conform to primitive Christianity as understood by them. Each congregation had several leaders who were chosen according to St. Paul’s instructions–as interpreted by the Sandemanians–without regard to education or occupation. They believed that the accumulation of wealth was unscriptural and improper. His upbringing probably accounts for Faraday’s declining the Queen’s offer of knighthood in his later years. He preferred to remain simply Mr. Faraday. During his life, he had also been offered burial in Westminster Abbey along with Britain’s kings and queens and scientists of the stature of Isaac Newton. He turned this down as well, in favor of a more modest end. His grave, where his wife, Sarah, is also buried, can still be seen in London’s Highgate Cemetery.

In 1804, he served as an errand boy for the bookseller George Riebau, delivering newspapers among other things, who a year later, indentured Faraday for a period of seven years. It was during these seven years of apprenticeship that Faraday read many books

Two books, in particular, captivated him:

Some writers also credit Isaac Watts’, The Improvement of the Mind, as another source that greatly influenced Faraday in his continued search for knowledge.

In 1812, at the end of his apprenticeship, Faraday was presented tickets to attend four lectures to be delivered by the eminent professor of chemistry, Humphry Davy and John Tatum, founder of the City Philosophical Society. Sir Humphry Davy was one of the most famous scientists in the world. Faraday jumped at the chance and attended four lectures about one of the newest problems in chemistry – defining acidity. He watched Davy perform experiments at the lectures. Faraday took notes and then made so many additions to the notes that he produced a 300-page handwritten book, which he bound and sent to Davy as a tribute. Faraday managed to get work for a few days taking notes for Davy, who had been impressed by the book Faraday had sent him.

When his short time as Davy’s note-taker ended, Faraday sent a note to Davy, asking if he might be employed as his assistant. Soon after this, one of Davy’s laboratory assistants was fired for misconduct, and Davy sent a message to Faraday asking him if he would like the job of chemical assistant. Faraday began work at the Royal Institution of Great Britain at the age of 21 on March 1, 1813 and continued his tenure for the next 54 years, where he was honored with the title of Professor of Chemistry, in spite of his lack of formal education.

It would be easy fill a book with details of all of Faraday’s discoveries – in both chemistry and physics. It is not an accident that Albert Einstein used to keep photos of three scientists in his office: Isaac Newton, James Clerk Maxwell and Michael Faraday.

Curiously, although in Faraday’s lifetime people had started to use the word physicist, Faraday disliked the word and always described himself as a philosopher. He was famous for never giving up on ideas that came from his scientific intuition.  The unit of electrical capacitance is named the farad in his honor, with the symbol F. The following is a timeline of this brilliant scientist’s critical discoveries:

1823: Gas Liquefaction and Refrigeration. This is the basis of how modern refrigerators and freezers work.

1825: Discovery of Benzene. Historically, benzene is one of the most important substances in chemistry, both in a practical sense – i.e. making new materials, and in a theoretical sense – i.e. understanding chemical bonding

1831: Discovery of Electromagnetic Induction. Faraday had shown that movement could be turned into electricity – or in more scientific language, kinetic energy could be converted to electrical energy.

1834: Faraday’s Laws of Electrolysis. Electrochemistry is the science that has produced the Li ion batteries and metal hydride batteries capable of powering modern mobile technology.

1845: Discovery of the Faraday Effect.  This is a magneto-optical effect, the first to link electromagnetism and light.

1845: Discovery of Diamagnetism as a Property of all Matter, Diamagnetism in materials, induced by especially strong modern magnets, can be used to produce levitation. Even living things, such as frogs, are diamagnetic – and can be levitated within a strong magnetic field.